Skip to content
HomeHow to grow MarijuanaHarvesting, Curing and Drying

Well, now that you’ve grown your marijuana, you will want to cur it properly so that it smokes clean and won’t bite.
You can avoid that “homegrown” taste of chlorophyll that sometimes makes one’s fillings taste like they might be dissolving. We know of several methods of curing marijuana so that it will have a mild flavor and a mellow rather than harsh smoke.

First, pull the plant up roots and all and hang it upside down for 24 hours. Then put each plant in a paper grocery bag with the top open for three or four days or until the leaves feel dry to the touch. Now strip the leaves off the stem and put them in a glass jar with a lid. Don’t pack the leaves in tightly, you want air to reach all the leaves. The main danger in the curing process is mold. If the leaves are too damp when you put them into the jar, they will mold and since the mold will destroy the resins, mold will ruin your marijuana. You should check the jars every day by smelling them and if you smell an acrid aroma take the weed out of the jar and spread it out on newspaper so that it can dry quickly. Another method is to uproot the plants and hang them upside down. You get some burlap bags damp and slip them up over the plants. Keep the bags damp and leave them in the sun for at least a week. Now put the plants in a paper bag for a few days until the weed is dry enough to smoke. Like many fine things in life, marijuana mellows out with age. The aging process tends to remove the chlorophyll taste.

The male plants will be taller and have about five green or yellow sepals, which will split open to fertilize the female plant with pollen. The female plant is shorter and has a small pistillate flower, which really doesn’t look like a flower at all but rather a small bunch of eaves in a cluster. If you don’t want any seeds, just good dope, you should pick the males before they shed their pollen as the female will use some of her resin t make the seeds. After another three to five weeks, after the males are gone, the females will begin to wither and die (from loneliness?), this is the time to pick. In some nefarious Middle Eastern countries, farmers reportedly put their beehives next to the fields of marijuana. The little devils collect the grass pollen for their honey, which is supposed to contain a fair dosage of THC. The honey is then enjoyed by conventional methods or made into ambrosia. If you want seeds – let the males shed his pollen then pick him. Let the female go another month and pick her. To cure the plants, they must be dried. On large crops, this is accomplished by constructing a drying box or drying room. You must have a heat source (such as an electric heater) which will make the box/room every 130 degrees. The box/room must be ventilated to carry off the water-vapor-laden air and replace it with fresh. A good box can be constructed from an orange crate with fiberglass insulated walls, vents in the tops, and screen shelves to hold the leaves. There must be a baffle between the leaves and the heat source. A quick cure for smaller amounts is to: cut the plant at the soil level and wrap it in a cloth so as not to lose any leaves. Take out any seeds by hand and store. Place all the leaves on a cookie sheet or aluminum foil and put them in the middle shelf of the oven, which is set on “broil.” In a few seconds, the leaves will smoke and curl up, stir them around and give it another ten seconds before you take them out. 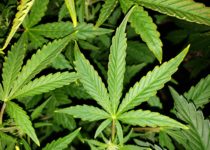 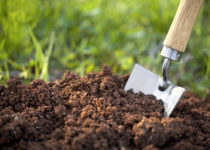 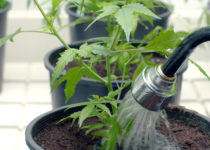